Capturing a Wintry Proposal in Munich

Nathan decided his girlfriend was the one. His fiancé to be. And when a proposal is being done, it has to be done right. So where do you go to help if you’re uncertain about where and how to do so? Fortunately, Nathan had Anastasia to advise him of a beautiful open park in Munich, Germany, where he could propose to the love of his life.

The city of Munich’s name comes from the Old/Middle High German word Munichen, or “by the monks.” A cloister of Benedictine monks decided to settle the area and create a monastery here. Over time, a village grew around the monastery that slowly became a town and a major city; the eventual capital of the state of Bavaria. Munich is estimated to have been founded around 1158 but because records are quite poor the city is probably much older. Just north of the Bavarian Alps, Munich is a scenic city that was extensively damaged by British bombing campaigns in the Second World War. But since then it has since revitalized itself into a world class city. At Anastasia’s suggestion Nathan leads his unsuspecting girlfriend to a park in central Munich where they enjoy the light snow and bold, bright blue sky on a December morning. Eventually when the moment is right, Nathan goes down on one knee, much to the surprise of his girlfriend. The offering of the ring is sealed with a kiss and the two begin their lives as an engaged couple. The smiles were easy to come by and they needed no encouragement from Anastasia. 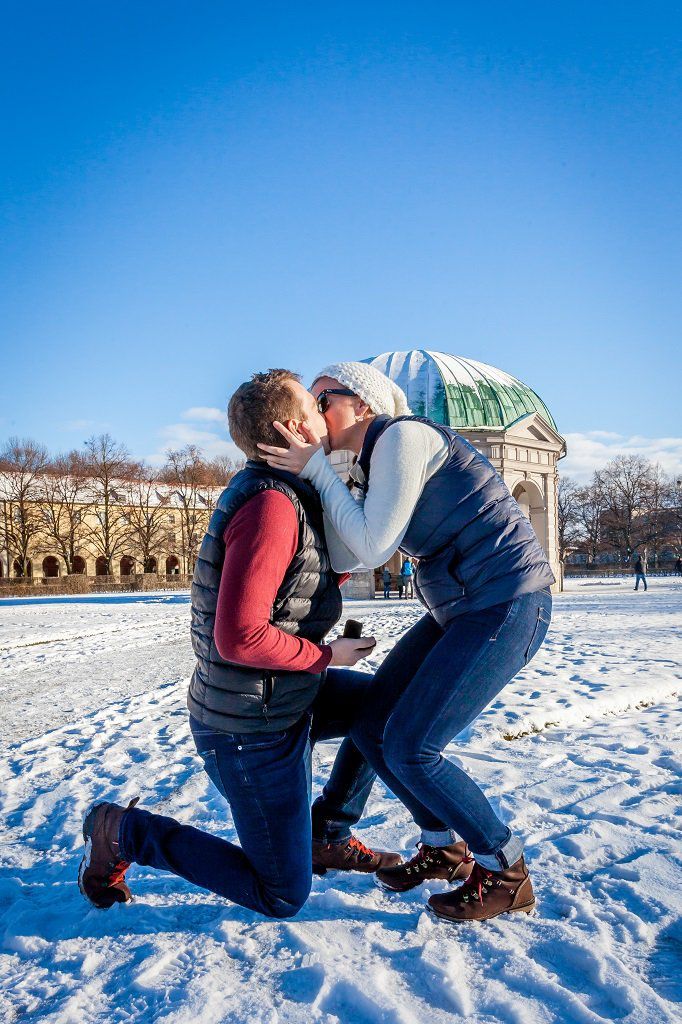 Anastasia expertly guides them around the park to paths and open spaces where the
architecture enhances the beauty of the scenery without taking away from either Nathan or his new fiancé. Skillful changes in lenses and lens apertures ensures the scene is nicely detailed and well-lit by the bright winter sun. Anastasia also chose open spaces knowing the snow would help create extra reflected lighting to properly expose the couple. Normally, direct sunlight can be harsh but the snow reflecting extra sun ensured they would be evenly lit. 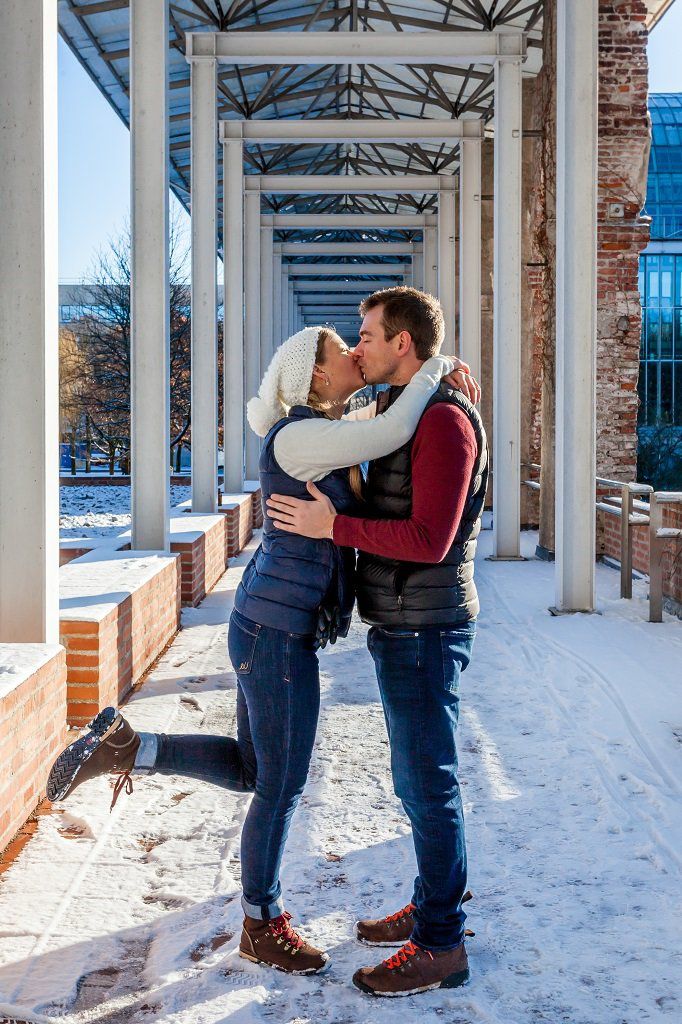 These techniques are subtle but something professional photographers rely on all of the time when working with natural light. While you may be a fair hand with a camera when necessary sometimes there are times when you want to trust a professional to document your special moment. Especially when it’s your moment and you’re trying to hold the camera at the same time! 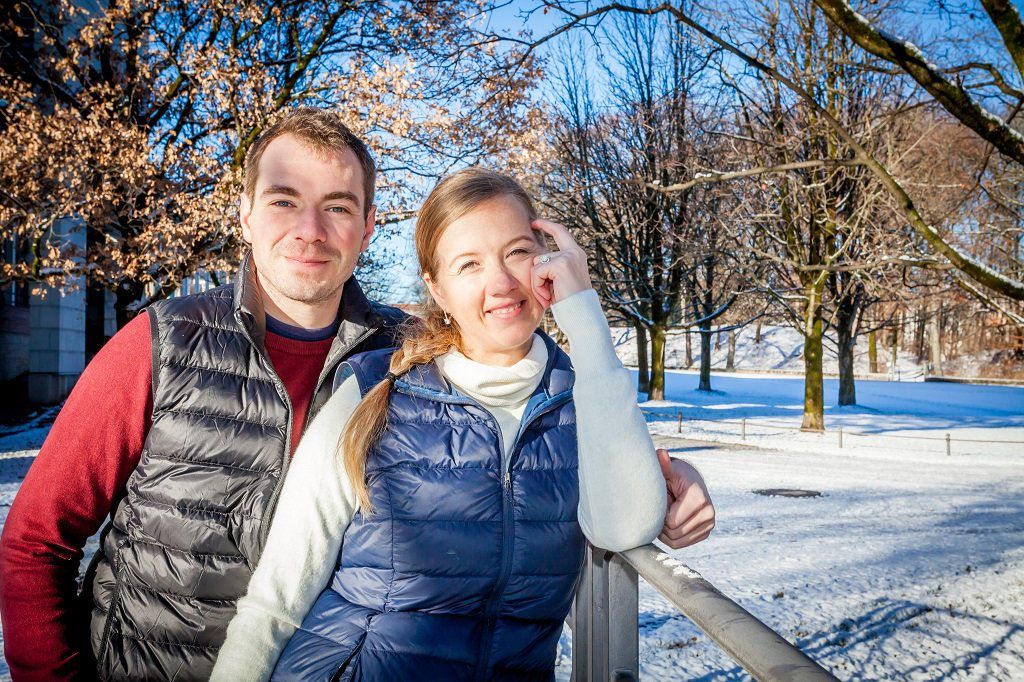 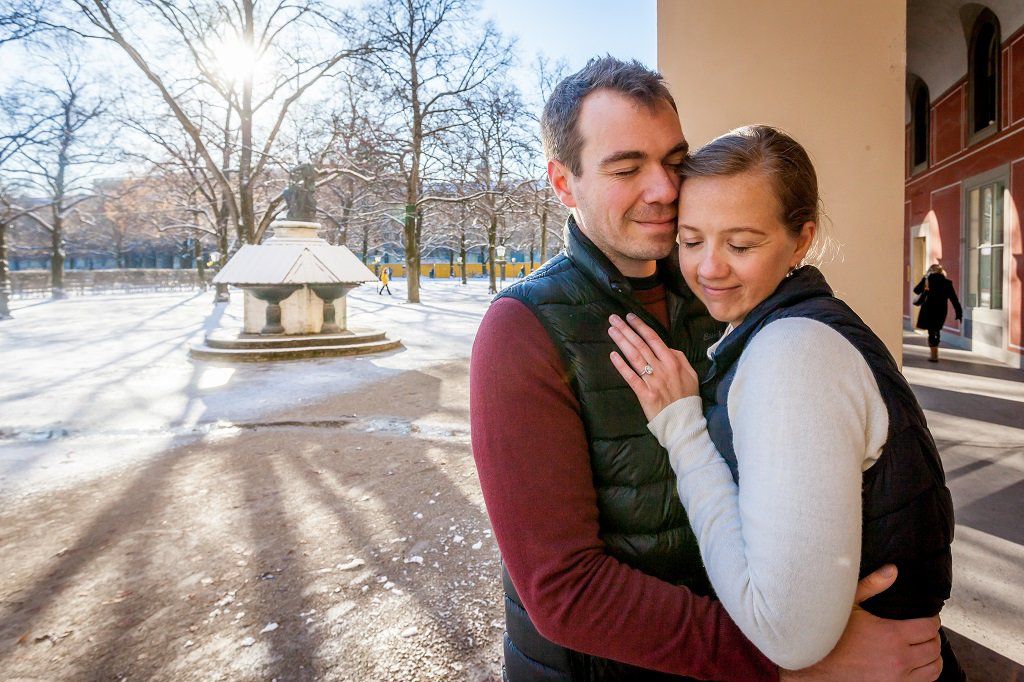 Nathan knew this was the time for just that and wanted to make sure there were no mistakes on this lovely day. And Anastasia fulfilled that expectation to the letter. She ensured the location was suitable for a proposal. She found angles and places with no one else around so the two appeared to have the park entirely to themselves. And even posed them in a few “gag reel” comedy pictures, such as Nathan begging and his girlfriend laughing away at him. 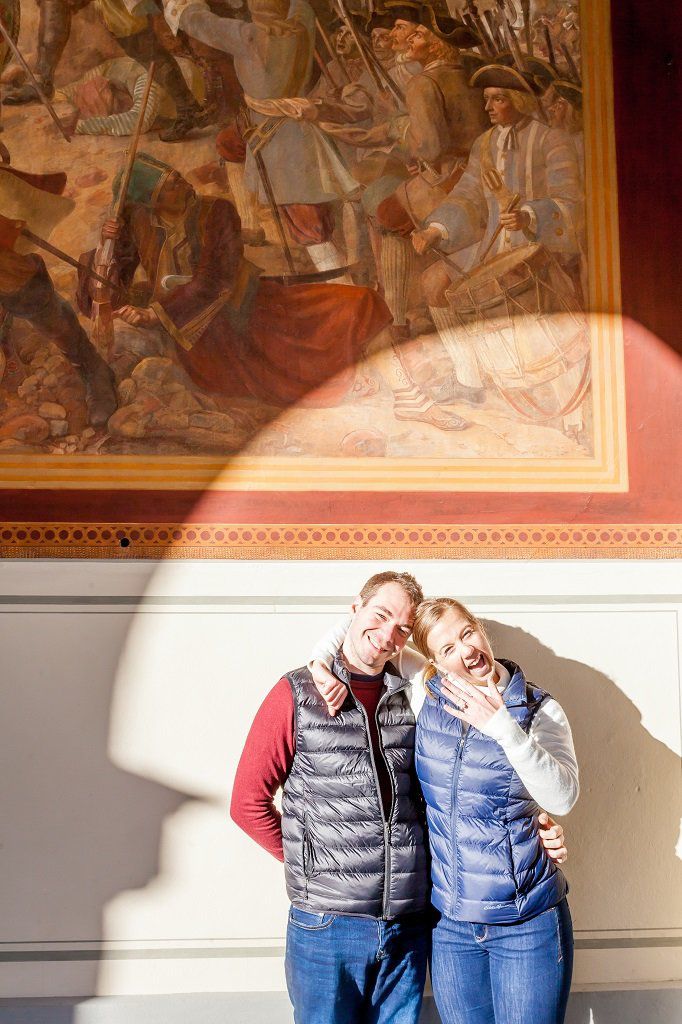 All in all, the photoshoot was a massive success. The two will go on to marry and remain grateful to Anastasia for her work and creative spirit. So do yourself a favor and collaborate with a vacation photographer the next time you need a special moment captured abroad!