Cartagena is a unique blending of the old and the new. One couple recently explored the Caribbean port’s colonial roots in Cartagena’s famous walled city and brought their own fiercely modern style to this stunning vacation photoshoot.

Cartagena is the capital of the Bolívar region of Colombia. It is a vibrant city on the Caribbean coast whose history stretches back to the height of the Spanish empire in the 1500s. Recently, a stunning couple from the U.S. traveled here and arranged a vacation photoshoot with one of our Localgraphers to capture their stay in this whimsical city locked in time.

This shoot was a fun and unique addition to the couple’s South American vacation. The couple had a great time working with their personal photographer to take these pictures in Cartagena’s walled city. Our vacation photographer, Jason, was excited to work with such an easygoing and photogenic pair.

The pictures definitely capture each of their personalities and styles. Jason, a Cartagena native, set up shots to reflect the pair’s relationship. One of the couple’s favorite images was the series of shots against the backdrop of colorful walls. 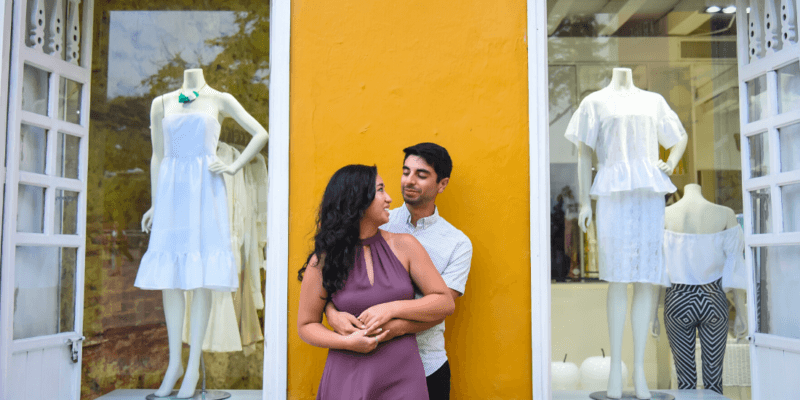 Step Up Your Vacation Photo Game
Get Professional Photographer

For such a fun and unique vacation photoshoot, no city could be better than Cartagena. The city’s colonial history reaches back to 1533, when it was founded by a Spanish commander on the site of an indigenous Caribbean village. Since then, the city has withstood sieges, raids, and invasions for centuries.

Cartagena was an important feature of the Spanish empire and a major port in the Caribbean. Spanish galleons once sailed from its harbors carrying gold and silver. Because it was so important, and so frequently under attack, the Spanish monarchy invested huge sums of money into building fortification for the city.

Much of that protective architecture remains today. To experience history from street level, you can visit the Castillo San Felipe de Barajas, one of the most formidable fortresses constructed anywhere in the Spanish colonies.

Here you can see the battlements and parapets still standing ominously above the city, or explore the maze of tunnels running beneath the fortress. When you’re at the Castillo, it’s easy to imagine the cannon fire of pirate ships off the bay. 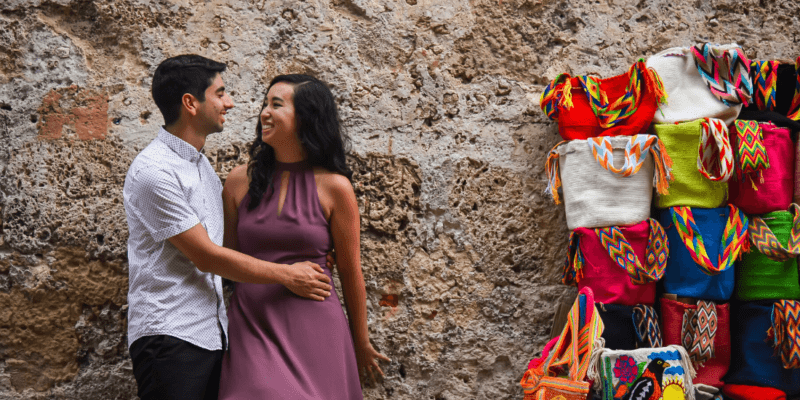 Vacation Photoshoot = Souvenir of a Lifetime

The city’s history is as vibrant and colorful as its streets – which is why it made the perfect backdrop for this couple photo shoot. The couple was thrilled with how clearly their personalities and feelings for one another came through in the images. They’ll have these truly spectacular images to show off to their friends and family at home. These personal mementos of their South American vacation are the perfect way to capture their time in Colombia.

The next time you’re on holiday, get in touch with one of our talented vacation photographers. Let us turn your vacation memories into works of art. No Matter Where You Travel, Always Take a Photographer With You
Start Your Journey Here
Share this article or Pin it for later