A Beautiful Family-To-Be Celebrate in Honolulu

If you’re looking for an idyllic location, Honolulu is it. Located on the beautiful island of Oahu, the Hawaiian capital has the perfect blend of tourist attractions, from golden sandy beaches with palm trees scattered around, to a vibrant city centre with shopping centres and museums galore.

Honolulu is where you’ll find some of Hawaii’s most popular places to visit, including the famous Waikiki beach, Manoa Falls, Pearl Harbour Museum, and many more. It’s such a vibrant and colourful city, and no matter what you want from a destination, be it lazy beach days, city life, historical monuments and museums or adventurous thrills, Honolulu has it all. Zyrine and her boyfriend made the trip from Lethbridge, Alberta, Canada to Honolulu – a celebratory trip to celebrate the news that they’re expecting their first child.

The happy family-to-be wanted more than just the memories to mark this special occasion though, so they came to us at Localgrapher, and asked us to help them plan a couple/maternity photo shoot. Local photographer Jolene was happy to help, and helped the happy couple plan a photo shoot in Honolulu. With Jolene’s local knowledge, they were able to find some of the best photo spots in the city, including in front of the colourful Rainbow Tower, on the sandy beaches and in front of the exotic palm trees.

Posing as a Couple in Honolulu Jolene also helped them find a few poses that really showed off their love, and added some fun and light-heartedness into the shoot. They timed their couples photoshoot so that they got the best of both the day and the evening. They started their shoot with the sky still clear blue, but the day quickly moved onto evening, meaning that the couple got a whole range of photos. From light and summery photos, to romantic sunset shots, Zyrine and her boyfriend definitely made the most of their time with local photographer Jolene. 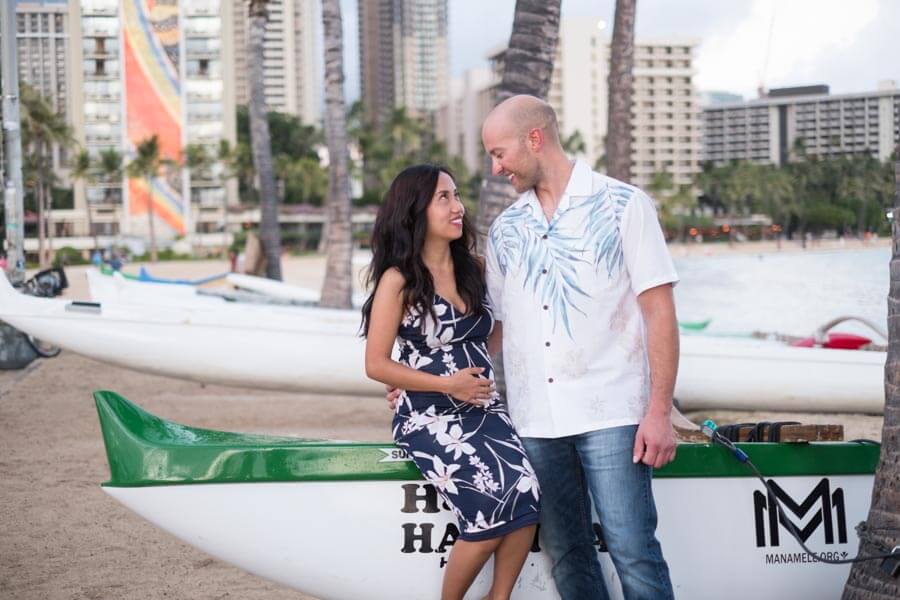 Introducing Baby to the Photo Shoot

Zyrine and her boyfriend’s baby may not yet have been born, but still they managed to include him or her in their photo shoot day.

They posed with their hands on Zyrine’s baby bump, showing just how much love they already have for their little bump. With each parent-to-be cradling Zyrine’s belly, the photos from their photo shoot capture the beginning of a beautiful family, and the start of their family bonds. Jolene was able to suggest some perfect positions for the couple to pose in so that Zyrine could really show off her baby bump, and the two could capture photos that told a real story of their love.

The happy couple came away from their day of photo taking with Jolene with beautiful photos that years down the line, they can show to their little one, to show them how much they were loved from the off.