Celebrating Anniversary and New Year with a Photo Shoot in Istanbul

What is better than celebrating the new year on vacation? Now imagine it’s also your anniversary. Najaf was celebrating his anniversary with his wife in beautiful Istanbul, and he wanted to ensure that they captured the occasion properly. And he had a wonderful idea.

Celebrating New Year as a Couple!

Istanbul is Turkey’s largest city. It straddles two continents – Europe and Asia – across the Bosphorus Strait, a narrow strip of water between the Black and Marmara Seas. This is reflected in Istanbul both physically and culturally, making this city of over 12 million people particularly dynamic.

The city has a rich and turbulent history, as its strategic location has made it the target of armies over the centuries. The Greeks, Venetians, Romans, and Ottomans have all fought for this site, lending to its historical tapestry. It was also the last stop on the Silk Route, which linked Europe and Asia.

This cultural diversity is reflected in the city’s architecture, which boasts of many churches adorned with mosaics and frescos, as well as the famous Blue Mosque and the Hagia Sofia. The chaotic and colorful Grand Bazaar is also a draw for many and has been in operation for centuries. Be prepared to drink tea and bargain for your goods, which is all part of the fun.

If the architecture isn’t enough to draw you, the food might. The cuisine of Istanbul is as diverse as its history. It can all be washed down with raki, an aniseed brandy, or a strong Turkish coffee. 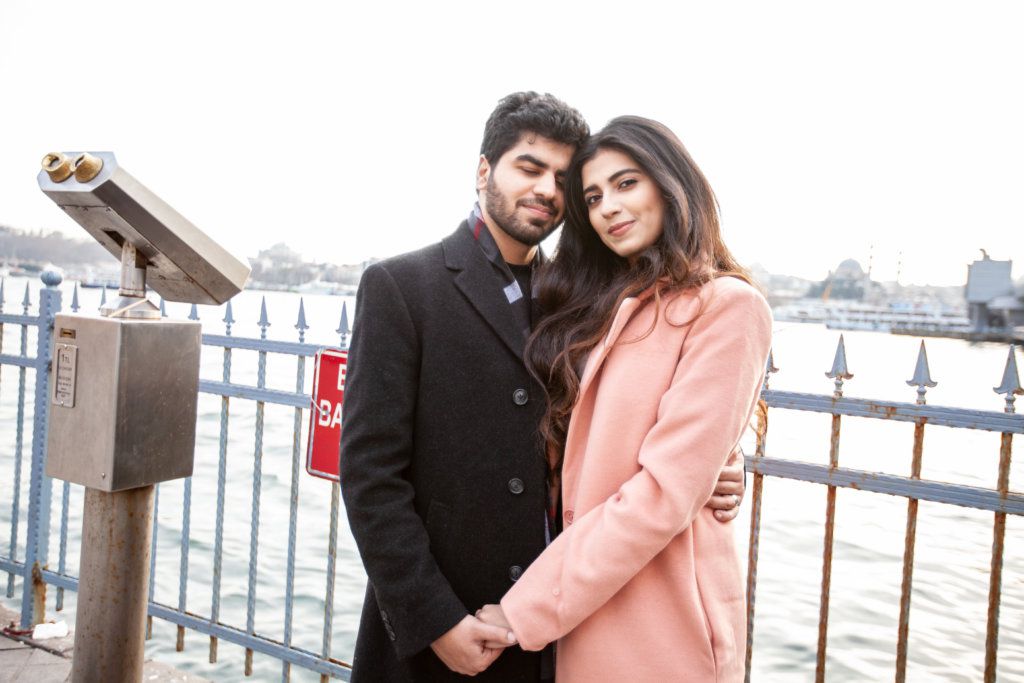 Treat Yourselves to a Private Photoshoot
Get Professional Photographer

It was in this historical city that Najaf and his wife were celebrating their anniversary. In order to make the most of their time there, they hired a professional vacation photographer named Ekaterina. Chicly dressed for the weather, Najaf and his wife started their photo shoot at the base of the Galata Tower, one of the city’s most interesting monuments, built in the 14th century.

Ekaterina also took the couple to a lovely, winding staircase, as well as a boardwalk overlooking the Bosphorus. Several more of the images are of Najaf and his wife enjoying the architecture of a beautiful mosque, its minarets soaring high above them. Najaf’s wife’s blouse coordinates beautifully with the soft stone of the mosque. Although they are both in black, the shots work well with the pale stone, overcast sky, and muted colors around them. The contrast isn’t stark; it’s artful.

Later, the couple changed into different ensembles for the final images, lending some deeper color to the shots, but still providing a lovely contrast. The cloudy sky was no problem for Ekaterina, as it made certain that there were no harsh shadows. Her photos are soft and warm (despite the clearly chilly weather). It is obvious that the couple is very happy together, and really enjoying their time in Istanbul as they celebrate their anniversary. Memories for Many More Years to Come

Professional photographers like Ekaterina can suggest the best locations for a variety of photo shoots, as they are often local experts. They want only to give their clients the ultimate photography experience, and memories to treasure forever.

Najaf and his wife can look back fondly on their time in Istanbul with these gorgeous photographs, which can be displayed proudly alongside their other family mementos.